In 48 hours on the Island (also at times accompanied by Robin Newlin) I recorded 78 species, including one or two especially interesting finds. Weather was dry, clear and sunny, with south-westerly winds-allowing for some visible migration viewed from the mountaintop on the 14th, followed by fog and fine rain through the morning of the 15th. This island is unfortunately patrolled by several well-nourished domestic cats. Night Heron Gorsachius spp. An individual flushed at very close quarters on the 13th showed characteristics shared by both Japanese G.goisagi and Malayan Night Heron G.melanolophus. Immediately striking was an extensive, bright sky-blue cere and bare parts around the eye, and in flight, thick and solid dark bars (not streaking or vermiculations) on the whitish-looking side of the body (- all features usually not or scarcely shown by Japanese?). It also posessed a dark crown that contrasted fairly noticeably with the rest of the head. Although extremely wary, and very unfortunately, not photographed due to its flight through trees and branches, it was subsequently briefly glimpsed twice, darting out of view along the shady trails through thick forest and bamboo. However, neither nuchal crest nor white-spotting on the upperwing were particularly noticable (if present), which perhaps points identification away from Malayan. I would welcome opinions as to its identity from observers experienced in both species. Does Japanese ever show thick barring? 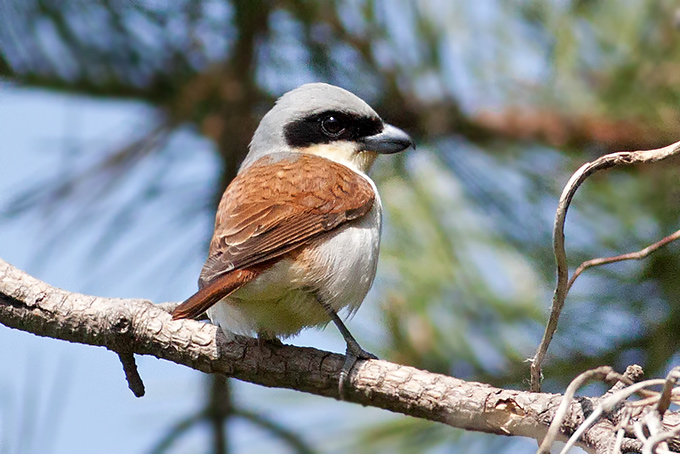 
Bull-headed Shrike Lanius bucephalus. A male and a female present every day.
Brown Shrike Lanius cristatus One confusus seen daily.
Long-tailed Shrike Lanius schach. One noticed hunting from a perch on the 13th and 14th, when seen to pounce on, kill, and later eat a Siskin. A second such victim was found impaled on a branch nearby. 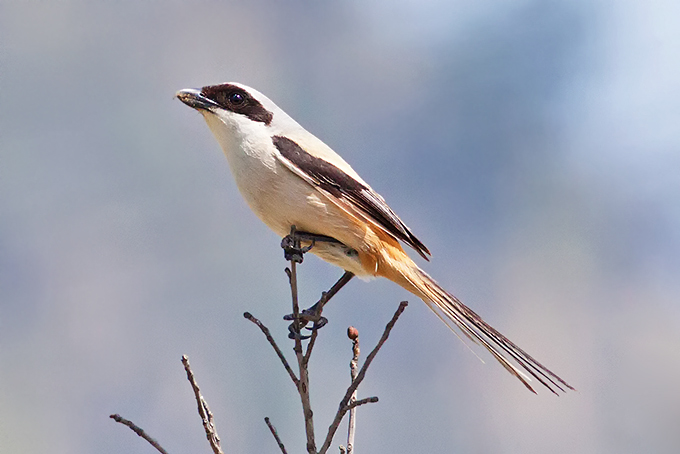 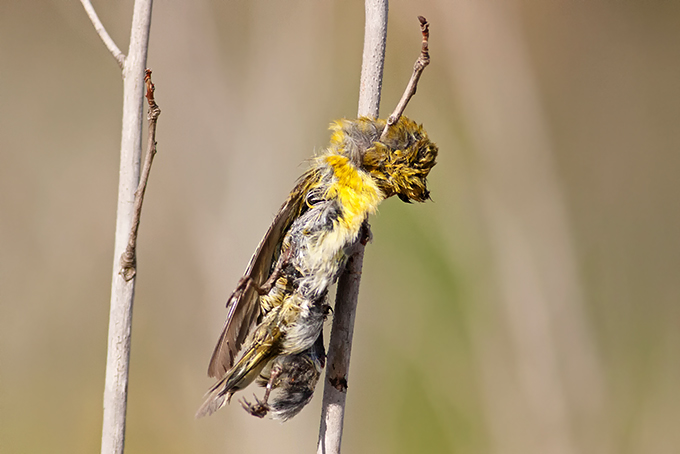 
Black-naped Oriole Oriolus chinensis. One on the 13th and 14th.
Eurasian Jay Garrulus glandarius. Heard several times on the 13th.
Eastern Great Tit Parus minor. Apparently two or three pairs breeding near the village.
Light-vented Bulbul Pycnonotus sinensis One heard on the 13th.
Brown-eared Bulbul Microscelis amaurotis. Several pairs on the Island.
Sand Martin Riparia riparia A “pure” flock of up to twelve individuals hurried east on the 14th.
Barn Swallow Hirundo rustica. Present daily, with c. 40 on the 14th.
Asian House Martin Delichon dasypus One on the 14th.
Red-rumped Swallow Cecropis daurica. Four or five seen daily.
Japanese Bush Warbler Horornis diphone. A fair number either heard singing or alarm-calling every day, evenly distributed throughout the island and apparently holding territory.
Manchurian (Korean) Bush Warbler Horornis borealis. One or two heard singing on the 14th.
Dusky Warbler Phylloscopus fuscatus. Several heard or seen daily.
Yellow-browed Warbler Phylloscopus inornatus. Only between one and three seen or heard.
Eastern Crowned Warbler Phylloscopus coronatus. One on the 14th.
Pale Thrush Turdus pallidus. Several seen or heard each day, including a pair apparently co-operatively hunting insects together.
Naummann’s Thrush Turdus naumanni. One on the 14th.
Rufous-tailed Robin Luscinia sibilans. Two or three heard singing daily.
Red-flanked Bluetail Tarsiger cyanurus. A female on the 14th.
Stejneger’s Stonechat Saxicola stejnegeri. A male and a female seen.
Blue Rock Thrush Monticola solitarius One singing in the harbour.
White-throated Rock Thrush Monticola gularis. One on the 14th.
Grey-streaked Flycatcher Muscicapa griseisticta. One the sunny afternoon of the 14th I saw at least 30 on the island, most of them accumulated along the mountaintop. 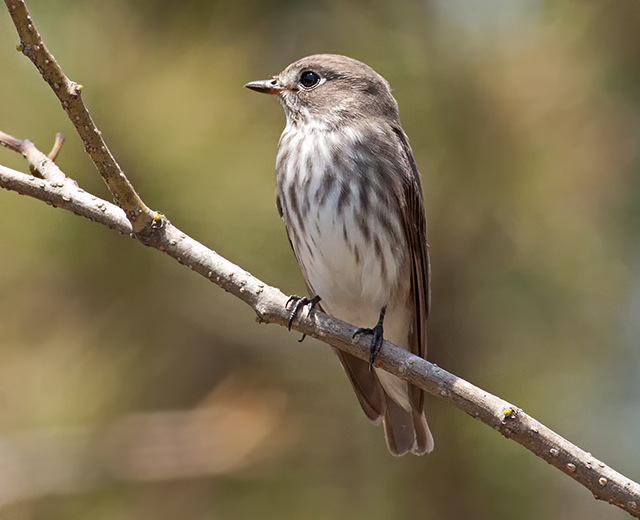 Bird News by Subhojit Chakladar with Jason Loghry The second consecutive week searching for Locustella warblers ended in failure but the effort turned up some pleasant surprises, including as many as 5 lifers for me. Weiyon-do is a delightful little … END_OF_DOCUMENT_TOKEN_TO_BE_REPLACED

Bird News from Nial Moores A total of 108 or 109 species were logged on this island between the afternoon of the 12th (when doing the World Migratory Bird Day Birdathon) and departure on the 17th. Although there were no … END_OF_DOCUMENT_TOKEN_TO_BE_REPLACED