Last winter Mr. Shim Heon-seop found a large flock of Asian Rosy Finch on Taebaek Mountain. He kindly shared information of his spectacular find and of the location, which is an area with wind-turbines and open agricultural fields at about 1200masl. Park Jin Young’s doctoral thesis also contains a record of this poorly-known species in the Taebaek City area: 300 seen in January 1998, published by Lee Jin-Won (likely the highest count to date nationally). We therefore decided to take advantage of the cold but dry conditions to visit the area in case the species might prove to be somewhat regular there. 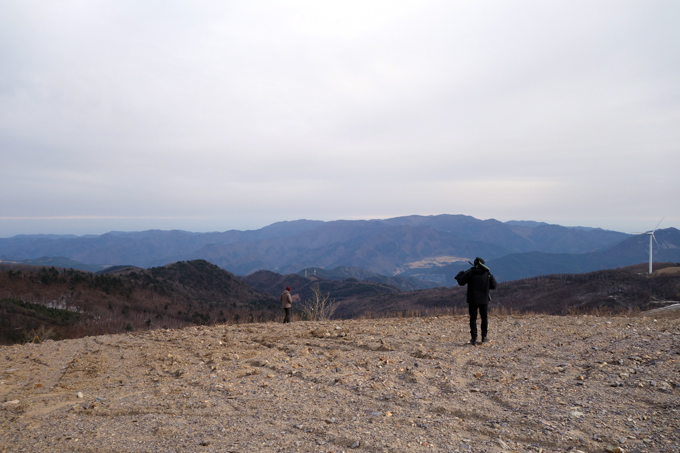 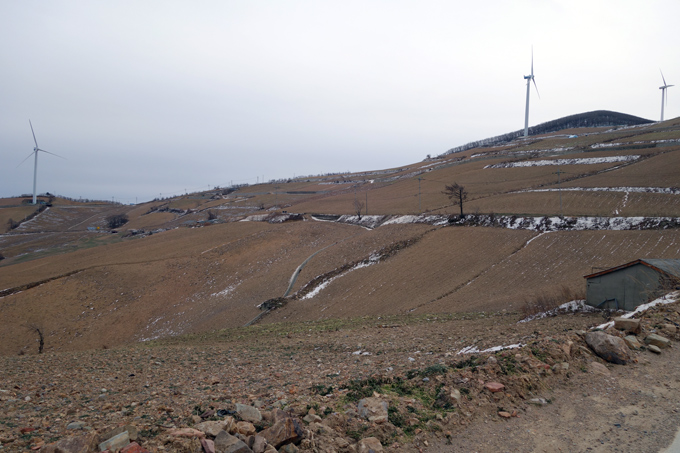 Soon after arrival, we found a large flock. The Asian Rosy Finches were, as in most areas, highly mobile and difficult to approach, even though once or twice they landed briefly only a few meters away. The flock (or flocks: see below) made wide circuits over the hill-side, before dropping into a small clump of trees and then onto the ground, before lifting up once more, most often in response to a passing raptor or vehicle. On his excellent Birding Beijing website, Terry Townsend eloquently described this typical restlessness of Asian Rosy Finch flocks, landing and lifting off soon after, “as if the ground was too cold for their feet!” (see: http://birdingbeijing.com/2014/11/07/return-to-lingshan/).

NM made a series of coarse quick counts of the flock (in blocks of ten) during the 90 minutes or so we were there, which ranged from a conservative 310 to a maximum of 375. A series of images taken of the main flock in flight contained 337 birds in one image and, 30 minutes later 355-359 in the second (please check the image yourself and let us know how many you can see!). Both JL and NM also saw a sub-group of c. 50 birds join the main flock just before we left: it seems very likely, however, that these were included in this flock 355+. 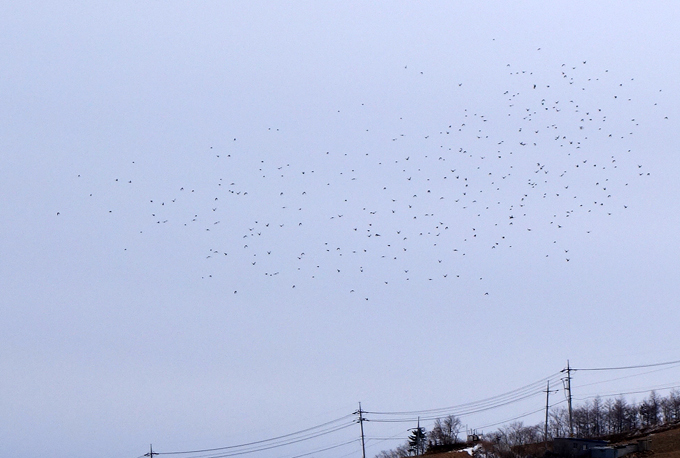 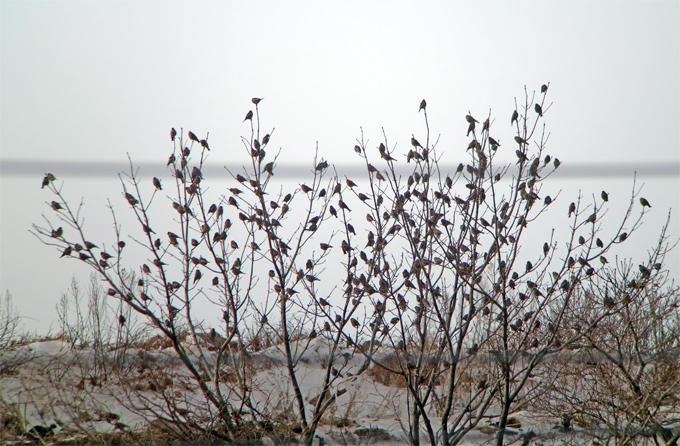 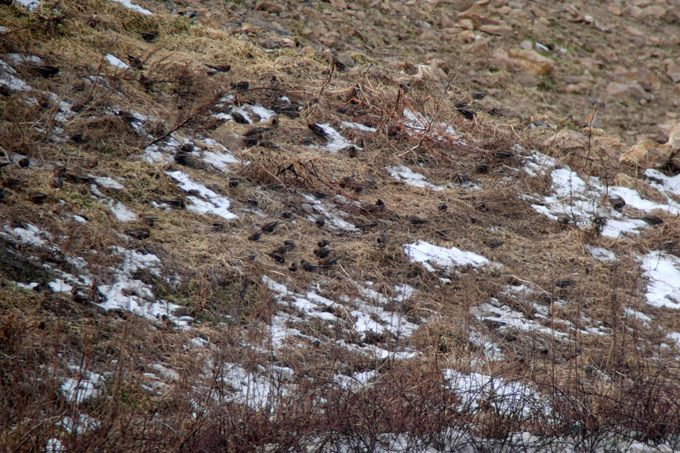 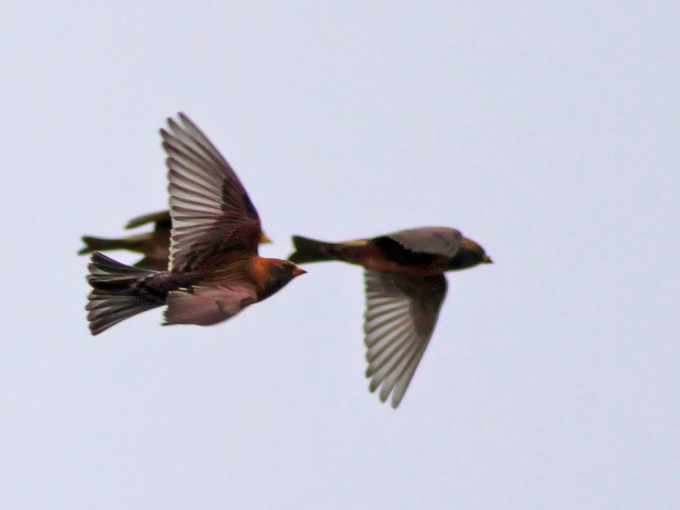 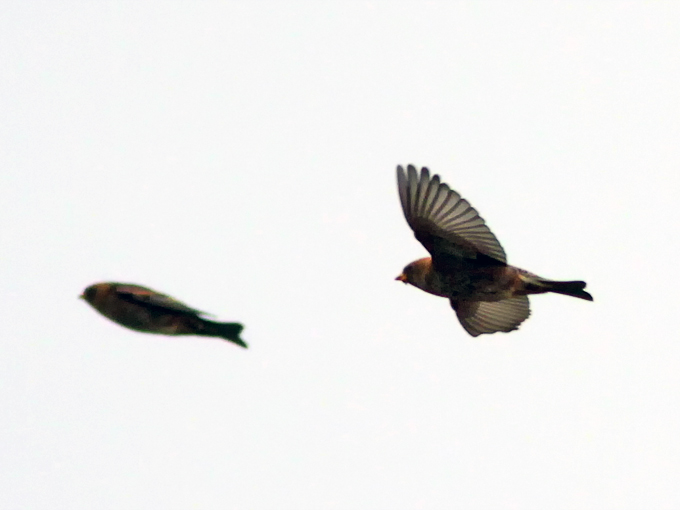 The Birds Korea 2014 Checklist lists Asian Rosy Finch as WV1. While this assessment appears to be technically correct (i.e. there are still <10 records annually), it is very likely that the small number of records is largely a result of the very few birders visiting potentially suitable habitat in winter. Since the 2009 / 2010 winter, large flocks of Asian Rosy Finch have been found on Jeju (180, in November 2010) and Jiri Mountain (150?) as well as on Taebaek; and smaller flocks have been found at several sites, including on the coast in Goseong County, inland in Busan and on Deokyu Mountain in Jeonbuk.  Records of this species therefore come from many parts of the country. As 70% of the nation is mountainous, and many peaks and cliff-faces are extremely difficult to access in winter, it seems highly probable that Asian Rosy Finch is much more regular and locally numerous in the ROK than presently understood. As such, the status code of Asian Rosy Finch will be amended in the next Checklist update.  To date, there appears to be no evidence to suggest a recent rapid increase in the species here or in the wider region.

Lower down the mountain in 10-15 minutes of rapid assessment in birch forest and earlier in mixed forest and stream edge, further species of note included 5-8 Siberian Accentor, c.4 Eurasian Bullfinch and a single Long-tailed Rosefinch.

Please note: the access road to this site is narrow, steep and potentially impassable in snow or wet conditions.