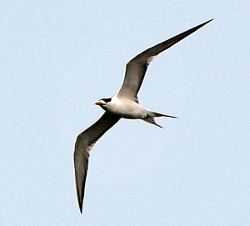 “The Ministry of Environment announced on July 4 that Crested Terns, birds that usually inhabit Southeast Asia, were found on Jeju for the first time in 94 years. Over 30 Crested Terns have been discovered, with the last sighting of the bird on the island in 1917.

The Crested Terns were discovered by a research team comprised of members from the National Institute of Biological Resources and the Jeju Wildlife Research Center while conducting a survey on bird migration.

The Crested Tern usually lives in Southeast Asia and on the Northern coast of Australia, and winters near the ocean close to its habitat. According to the Jeju Wildlife Research Center the discovery of the birds, over 1,100 km north from their natural habitat, seems to have been caused by typhoon Meari. The typhoon developed near the Philippines then moved towards Taiwan, a natural habitat of the Crested Tern. The birds were found after the typhoon had moved away from the island.

The Crested Tern averages 42 cm tall and looks like the black tailed gull but has a yellow beak, black legs, and black plumage.

Recently, due to climatic change and typhoons, Jeju has found many rare birds visiting the island, such as the Great Frigate Bird (found in August, 2004), the Ewiniar Arctic Tern (found in July, 2006), and the Black Streaked Shearwater* (found in July, 2010), among others.”

*Note from Editor: should be Slender-billed/Short-tailed Shearwater